“After I met Tim [Young]…and explained stuff to me, I felt extremely comfortable with him. He’s a great help. He knows what he’s talking about. He knows his stuff.”

Drilling rig floors are exceedingly hazardous for offshore workers. If safety protocols aren’t followed precisely or if the company doesn’t properly train its employees, then the chance of accidents greatly increases. This was the case, unfortunately, for our former client, Lee.

Despite working offshore for over a decade, Lee’s company hadn’t thoroughly trained him on how to respond to certain situations. As a direct result of this, Lee was tragically injured and lost his job. This is his story of how his accident happened and his journey with us through his maritime injury claim. With our guidance and hard work, Lee was able to turn this horrible situation around and move forward with his life.

“If it wasn’t for y’all I don’t know where I’d be right now. Y’all helped me through everything. Y’all been great. Thank y’all very much.” Lee K. | Opp, AL | Head & Brain Injury

“I’m Lee from Opp, Alabama. I’ve got a wife and two kids at the house. I’ve been working offshore for roughly 12 years altogether, up until I had the accident. I was a lead floorhand on an oil rig in the Gulf of Mexico. Floorhands, we usually handled everything to do with the drilling on the rig floor. Tripping pipe, cleaning,  anything drilling-related, we kind of handled. So we stayed pretty busy.

I loved my job. That was the only thing I’ve known. That’s the only thing I did since high school. I never really wanted to do anything else but offshore work. Had plans to make it to driller or toolpusher one day, but things change in a hurry.

The Day of the Accident

The day of the accident, I was on the rig floor. We were tripping pipe … Or making up pipe rather. We picked up a joint of pipe, and the rabbit didn’t come out of the pipe. It had got stuck apparently. Never seen this happen. Usually, it gets stuck in the bottom if it’s stuck. I went to check for the rabbit to see where it was. As soon as I got up under the pipe, the rabbit fell from roughly about 40 foot at the top of the pipe and hit me in the face, knocked me down.

I don’t remember too much of it, but I just know I was in a lot of pain. That’s when I had to go to the medic’s office. They tried to take care of me there. I got flown off the rig and transported to New Orleans to the hospital. Ended up having to have reconstructive surgery on my face. Eight plates, a bunch of mesh. Had problems ever since then with headaches and memory issues, and a bunch of different stuff.

Everything hit all at once. I was nervous. I was scared. Financially, I had no clue what we were going to do. After my injuries, the company I was working for, they laid me off. I was still having issues with my injuries, and they acted like they really didn’t want no part of that. They acted like they really didn’t really want to help. They tried to tell me I was clear. Good to go, and I knew I wasn’t.

It changed my life for sure. After that, like I said, I’ve worked offshore all my life. That’s all I ever wanted to do. When I got laid off after the accident, I didn’t really know what to do. I kind of hung out for a few months, just to see what happened. Nothing ever did, so I finally decided I was going to try to do something about it. Contact somebody, talk to them.

After my accident, I was suffering from headaches real bad. That was my biggest issue I was having. I couldn’t do nothing like I used to. I was having problems just getting around, really. Doing everyday chores and stuff was becoming a hard task.

I debated on the option of trying seek counsel on this. It was something I never really wanted to do. I’ve never been that kind of person, I guess. I thought it would be bad of me to do that. Looking back at it now, I’m glad I did do this. I don’t feel bad about it at all, just because I’m looking after me and my family, and my family comes first before anything.

I started doing some research online. I come across The Young Firm on the internet, and I did a bunch of research on their website. Read about what needed to happen, or what my options were really. The Young Firm’s been great. They’ve helped me every step of the way. They have videos online that’ll help you out. They’ll walk you through the process. I wouldn’t have been able to do this without them.

They’ve been there for me if I needed anything, I could call them. Any information I needed, they had it. It’s been a blessing really.

When I first met Tim Young at The Young firm, I was nervous as I could be the first day. Like I said, I’ve never done anything like this in my life. I was nervous, anxious, everything all at the same time. Didn’t know how this was going to go. Didn’t know what to expect. After I met Tim and he kind of walked me through things, and explained stuff to me, I felt extremely comfortable with him.

He’s a great help. He knows what he’s talking about. He knows his stuff.

He helped me through every single step of this process. Everything I did, he was there helping me. The staff here and Tim,  Tammy, Lise, my case manager, they’ve all been great. Anything I need anything, they’ve all been there for me. They get back with me on anything I need. Any information. If I had any questions about anything to do with the case, they were there. I can’t say how much I’m grateful for it, and how much this really did change my life.

Moving Forward After the Settlement 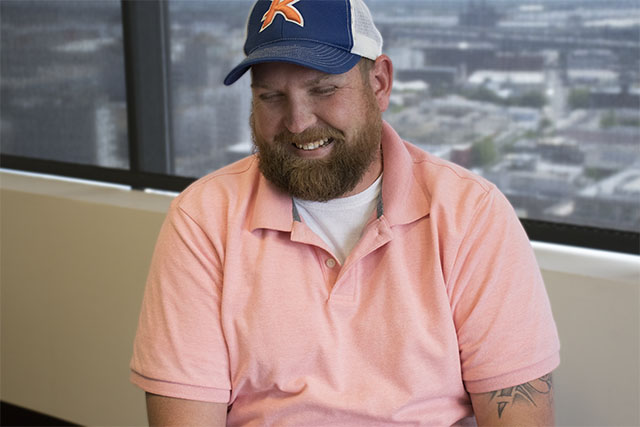 When we received our settlement, we were very happy with the amount we received. It was more than enough to help me and my family out.

Now that everything’s over, we bought some land and we’re going to build a house. I’m set financially for a while. This gives me plenty of time to find new job opportunities. This is going to be a new start for me and my family. This is going to change our lives.

The best advice I can give anybody going through anything like this, I guess, don’t be scared to do it. Like I said, I didn’t want to do it either. It just seemed wrong to me at the time, but this is the best thing that’s happened to me in a long time. Don’t feel bad about it.

That’s the best thing I could tell you, is look after your family. Don’t worry about what people are going to think about you or how you feel about doing it, because it’s a big help. It’ll change your life. It really will. It did mine. My family was trying to push me to do it. They liked the idea. Like I said, I’ve just never been that kind of person. It didn’t feel right to me but actually, I’m glad I did now.

I just want to tell Tim, Tammy and Lise, and everybody here at The Young Firm, thank you for everything that you done. If it wasn’t for y’all I don’t know where I’d be right now. Y’all helped me through everything. Y’all been great. Thank y’all very much.”

“In Lee’s case, he was struck in the face when he looked up a pipe that contained something that’s called a Rabbit, and a Rabbit is a large heavy object, and it should not have been stuck in the pipe. Lee did not know that. It did not come out when they lifted the pipe up off the rig floor.

The Company was Blaming Lee for His Accident

One of the things about Lee’s case that really intrigued us was, he was being blamed by the company for his accident. And the company was adamant that the accident was all of Lee’s fault. We heard again and again, how could he look up the pipe? He should have never looked up the pipe, he knew the Rabbit was up the pipe. And the company essentially said, this was a case they didn’t feel they should pay any money whatsoever on. 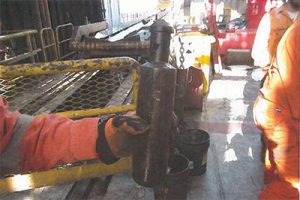 What we eventually learned through discovery was that they had never been given any guidance out there as to what to do if a Rabbit got stuck up the pipe. We took depositions, we really dug in because we felt strongly in Lee’s favor, and we dug in and we proved that the company really did not give any guidance to anybody out there.

Other employees had also looked up the pipe from time to time, looking for the Rabbits that had gotten jammed up the pipe. It really became a case that unfolded, and as we did more discovery, we proved more and more fault on the company, which ultimately helped Lee get a very good settlement for his case.

Lee Healed Quickly, But This Created Difficulties in the Case

Another thing that we faced in Lee’s case was he had a very traumatic accident, he was struck in the head and his head suffered some crushed bones, but he recovered remarkably well and a year or two down the road, a year down the road, during his case, it was very hard to tell what he had actually been through.

We went out and we created a video of his past medical slides and this actually showed for the judge and the jury, it would have showed them what he went through. It showed the head being rebuilt, it showed the screws in his head that were needed to hold the fractures together.

We’re Proud to Have Helped Lee 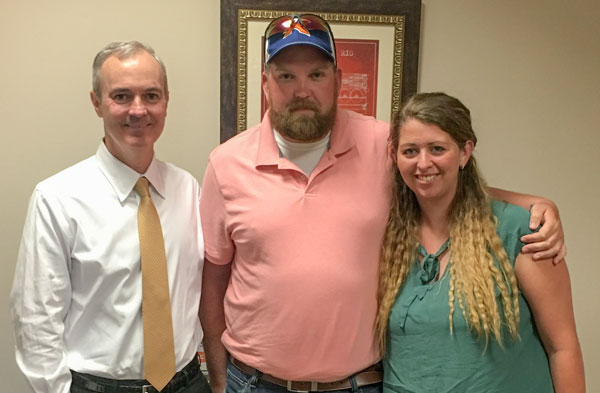 Lee is really just a great fella; we’re so happy that things have worked out for him and his wife, Ashley. They have two children. Just very, very nice people. I know Lee was apprehensive when this process started. We understand that. We know a lot of people are very apprehensive. Lee basically just wanted to keep on working, and he did try to work for a period of time. He knew he couldn’t do it.

He came in to see us and we’re very proud of helping Lee. We’re very happy that we were able to tell his story by getting into depositions, proving the company to be at fault, and really doing the video that showed what he went through medically. We feel like we really told Lee’s story for him, and it resulted in a very good settlement for him, and it’s really put he and Ashley in a much better place than they were when they started this whole journey with us.”

More stories about workers who had head injuries: